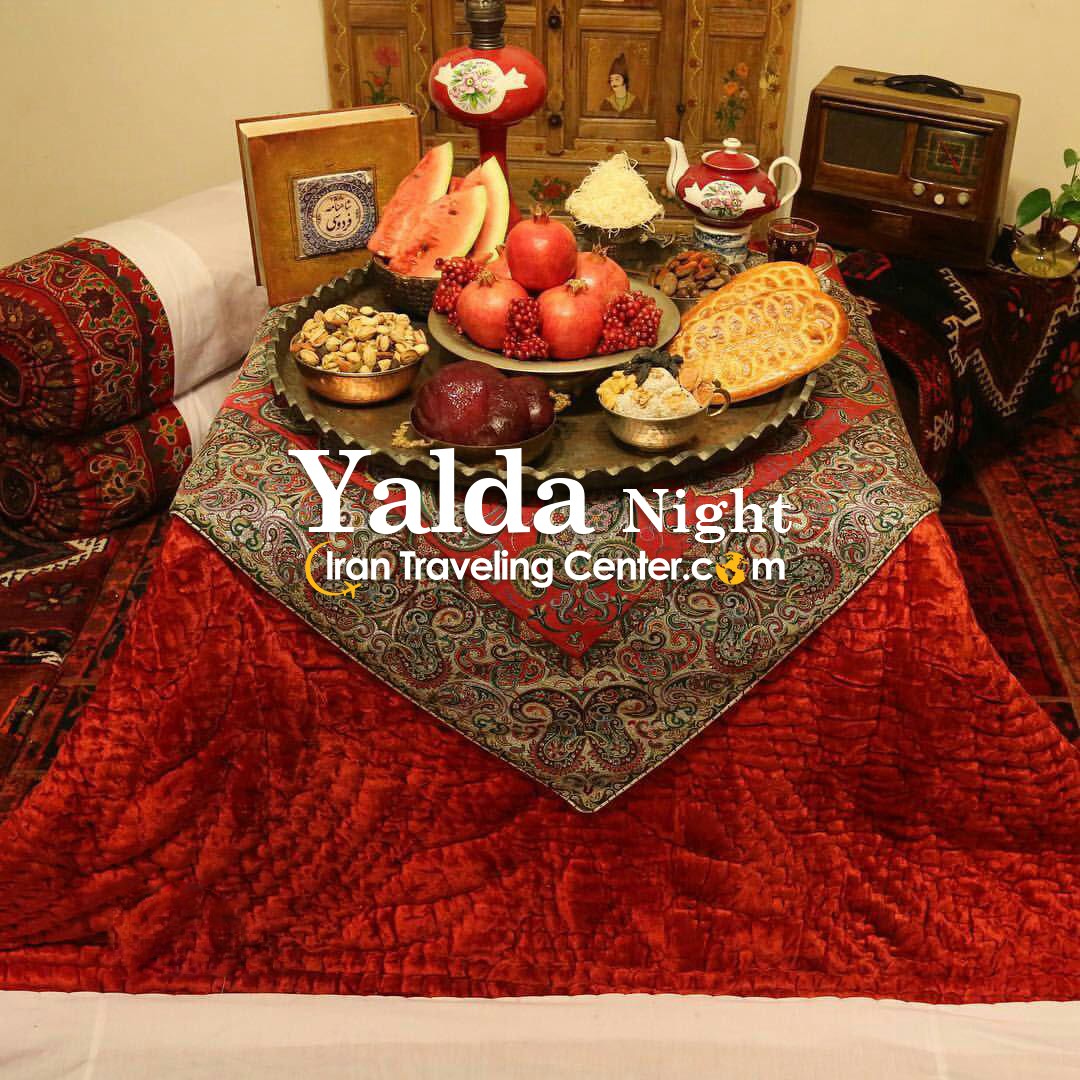 For thousands of years Iranians have been waking until dawn in the last night of autumn which is the longest and darkest night of the year to celebrate Yalda Night. They have been gathering in the groups of family and friends in order not to be beaten by the grief out of lack of light and power of darkness as they believed. This night is called Yalda Night (Shab-e Yalda). Yalda Night is also known as Shab-e Cheleh.

Yalda Night is one of the most important feasts in ancient culture of Persia which Iranians have inherited from their ancestors. Based on solar calendar, it refers to a time between the sunset of autumn’s last day (30th of Azar equal to 21st of December) and the sunrise of the first day of winter (1st of Dey equal to 22nd of December). In northern hemisphere, Yalda Night coincides with winter revolution. From then on, nights get shorter and days longer, gradually.

Yalda Night is a celebration which has been rejoicing since seven thousand years ago among Iranians and many other nations with the same culture mostly Iran’s neighbor countries namely Afghanistan, Tajikistan, some parts of Pakistan, India and Kashmir.

Yalda is a Syriac word which means birth, produce or create. The word Yalda refers to the night of sun’s birth. In this night Iranian families make tasty foods and serve different types of fruits specially watermelon and pomegranate and enjoy the night together. After serving snacks and nuts they read Shahnameh and Divan-e Hafez. They believe that Hafez foretells through his poems. They also sing and dance all together.

For ancient Iranian people darkness was the symbol of devil. Therefore, in the longest night of year devil darkness stays longer, this night was considered unlucky and when the night came they lighted fire in order to kill darkness and devils. People gathered and spent the night by eating, drinking, chatting and dancing.

Sometimes, Iranians spent Yalda in the hillsides of Alborz Mount until the sunshine as they were waiting for the new birth of light the way they used to believe. Some people in temples used to pray and ask god for the victory of light over the darkness.

The day after Yalda Night was called Khorrooz (day of Sun) which was a national day off on which all people were equal regardless of their social status. On this day everybody even the king used to wear simple clothes in order to seem equal and nobody had to command others. Duties were used to be done voluntarily not under the command of other people. On this day war was forbidden as well as killing animals. This was also known for enemies and so they stopped killing each other on frontiers on the day after Yalda. Sometimes the ceasefire on this day led to a longtime peace.

On Yalda Night people used to sit around a fireplace until sunshine in order to receive the news about success of light and defeat of darkness. Based on an ancient tradition kings left the crown on this day and wore white clothes and used to sit on a white carpet.  Doorkeepers and guards of the king palace as well as all slaves and servants were set free in the city to live like ordinary people. Kings, rulers and the public were all at the same position on this day.

Pomegranate and watermelon with their red color were the symbols of sun in the night. On this night, just like Tiregan Feast, foretelling by Divan-e Hafez became a custom later times.

Customs of Yalda Night changed over time but it is still important in different parts of Iran. All Iranian ethnic groups including Fars, Kurd, Lor, Turk, Baluch and Arab share the same spirit of Yalda Night and that is joy, love, friendship and honesty.

What people are still interested in, on Yalda Night is foretelling by Divan-e Hafez. In some other parts of the country people read Shahnameh (The Book of Kings) by Ferdowsi. Story telling by elderlies is another tradition of that night which makes it joyful.

Eating watermelon and pomegranate is still a part and parcel of Yalda Night. So many people believe that if they eat watermelon in Shab-e Cheleh (Yalda Night), they will not get sick during the whole coming winter.

If your travel time coincides with Yalda Night, you can organize your trip easily by contacting our correspondence colleagues via e-mail to take part in this ceremony. Certainly this night would be one of the most memorable nights of your journey.