One of the most ancient cities of Iran with unique architecture of gardens and monuments is the amazing city of Isfahan. This city which has been the capital city of all of Iran during three dynasties has many attractions to offer to its visitors. Isfahan is one of the best and most gorgeous cities of Iran. It is called “half-of-the-world” by many people due to its uniqueness and grandeur. It is pleasantly rivaled with other cities of Iran. It is a live museum of artisans and  handicrafts-men, and its historic bazaar, attractive bridges, and adorned mosques are the most wonderful highlights you can enjoy. These are the most valuable attractions in tourists’ eyes.

Top Things to Do in Isfahan
Previous
Next

Naqsh-e Jahan Square: Known as Imam Square,, this place, as one of the most fabulous attractions of Iran, is placed at the center of Isfahan  Iran.It is an important historical place and one of UNESCO’s World Heritage Sites. This old square is one of the largest and a unique one across the whole world. The square is surrounded by fabulous and eye-catching attractions such as Imam Mosque, Sheikh Lotfollah Mosque, Ali Qapu and finally and a set of stores which make up the traditional Bazaar of Isfahan encircling the Square where you can shop for excellent handicrafts of the city of Isfahan and Iran. This160 meters-wide and 560 meters-long square is surrounded by buildings from the Safavid era. You can see the Imam Mosque on the south side of the street. There are some horses with their carriages on which you can do horseback riding and they will take you back in time to the Safavid era as if you are the king on the horse. 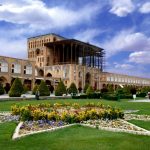 Vank Cathedral: Another marvelous piece of art with splendid architecture is Vank Cathedral in Isfahan. This church is truly one of the must-see attractions of Isfahan. The church was a place of worshiping God for the Armenian immigrants fleeing from their homeland and taking refuge in Isfahan under the cover of Shah Abbas I. when they entered Isfahan, these refuges constructed churches and monasteries near their residence to do their religious ceremonies. This completed-in-1664 church includes a bell-tower, built in 1702, a printing press, a library founded in 1884, and a museum inaugurated in 1905. Its architecture is a combination of 17th century Safavid style with lofty arches and a dome with Islamic style. Its museum, the house of priceless collections of various sorts of items gathered from all the Armenian world such as Safavid costumes, tapestries, European paintings, embroideries, great bibles including a small, seven-gram bible form believed to be the smallest written text in seven languages. The biblical story of the creation of the universe and man’s expulsion from the universe are depicted by the paintings drawn on the double-layer brick dome and it is festooned with floral patterns in the azure interior. This masterfully built cathedral is a must-see tourist attraction and one can call it one of the wonders of the world.This church is located in Julfa district in Isfahan where Armenians still live. This part of the city of Isfahan is full of cozy cafes where you can spend a pleasant evening drinking what your heart craves.

Si-o-seh Pol: is probably Isfahan’s most famous bridge. It is made up of 33 arches in a row. The bridge is constructed on bases of great width and it has got a tea-house accessible from the southern bank. The bridge is 295meters long and 13.75meters wide. The side of the bridge where the River of Zayandeh-Rood had a faster speed was supported by supplementary arches. It has been the model for constructing the following bridge 50 years later, Khaju Bridge. It is regarded as one of the masterpieces of Iran’s and the whole world’s architecture and bridge construction.

The Amazing Birds Garden in the City of Isfahan is another attraction inside the city of Isfahan. The fantastic birds garden of Isfahan was formed inside the great city of Isfahan by its municipality in the 1990s and this fabulous garden is now supervised by the recreation and welfare organization which is a subsection of the municipality of Isfahan. The area of this garden mounts to 17000 square meters. The garden is enclosed by a chain-like fence with eleven metal bars of utmost 22 meter height. There are over 5000 birds of 130 different species grown and sheltered in this magnificent and huge garden. The birds come from different regions in Iran and other countries around the world such as Tanzania, China, Indonesia and Australia. The place has now changed into a famous attraction in Iran visited by many foreign and Iranian citizens who love nature and fauna. This is a unique garden suitable for keeping different kinds of birds and the local species of birds from Iran are introduced here to the other nations. It is the best when you include a tour of this natural attraction into your itinerary while visiting Iran during your Iran tour.

Shaking Minarets or Menar-e Jonban is the most famous historical monument in Iran, though it is not the most important one. It was constructed during the Ilkhanid period. The edifice was decorated with dark blue tiles and bricks. Two small and light brick towers on top of eivan were added during Safavid era. Each minaret has a spiral staircase to reach you to the top of the minaret. The highest part of every minaret has small open arches. Because one can shake not only the minarets but also the whole eivan and the vault. When you climb the staircase from ground floor to the roof of the vault and eivan, and reach the summit of one of the minarets, and hold the minaret and shake it by hands, then the other minaret on the opposite side will surprisingly shake, too. The main reason is the ratio between the height and width of the minarets and the width of the eivan. This instance of unprecedented coupled vacillation is observable from the ground.

Two Persian local specialties that you can test in Isfahan are Gaz of Isfahan and its Beryani. They are really delicious foods and you will surely shop to take Gaz as a souvenir during your visit of Isfahan’s attractions if you taste it.

Music Museum of Isfahan hosts art and music lovers from all over Iran and around the world to see the traditional and modern Persian musical instruments with a sample live performance (short concert) to enjoy your visit of Isfahan and make your tour one of the most memorable tours in Isfahan.The staff and musicians of this museum are very kind and amiable as they answer all your questions and give you comprehensive information with open arms. You can experience one of the best memories of your life when you visit this museum where you can learn how Persian musical instruments are made and even touch or sense these instruments. Bye the way, there is just a five-minute walk from this museum to the Vank Cathedral, one of the most famous attractions in Isfahan.

Chehel Sotoun Palace: Another architectural masterpiece in form of garden has emerged inside the city of Isfahan which is Chehel Sotoun (fourty colomns) Garden. Chehel Sotoun is a mansion in the heart of a garden constructed by Shah Abbas II for receptions and amusements. Ambassadors and dignitaries from other countries were received in here by the Safavid King of Iran inside its reception halls. The twenty slender columns out of wood which support the entrance mansion whose shadows are reflected inside the water and seem to make up the sum of Forty Columns. This palace embraces many paintings, frescoes and ceramic panels depicting historical scenes such as the Battle of Chaldiran, the reception of Uzbek King right after the completion of the palace and so on. There are also pictures of celebrations of joy and love in traditional Persian miniature styles. This palace is one of the 9 Persian Gardens which is again listed as UNESCO World Heritage Site.