Things to Know Before Traveling to Iran

Traveling to Iran doesn’t have to be difficult at all, tourism is growing as relations develop; although western world media always like you to think Iran is a secluded and turbulent country. Surprisingly as soon as entering Iran, you will recognize the atmosphere is really different. Iranian people always welcoming travelers and communicate with them easily.

The country itself holds many surprises for you and offers any type of interest. The climate can fluctuate greatly, depending on the area and time of year. While in north and north west parts its almost cold with rain and snow in autumn, in south the weather is as pleasant as spring. Also it has mountains for skiing and hiking, beaches for swimming and diving, deserts for exploring, cities for sight seeing and history for uncovering. Iran’s diversity is not limited only to regions and climate;  but also many different cultural groups such as Persian, Azeri, Kurdish, Lur etc. Whom are proud of their own culture and of being Iranian.

Travel Is the Only Thing You Buy, that Makes You Richer:

Ancient Persia (called Iran) has been in existence for over 2,500 years. The powerful country of Zoroastrian, Cyrus the Great, The Achaemenid Empire etc. Arts, architecture, spiritual beliefs and culture have poured back and forth across political borders here, and history can be read clearly in UNESCO World Heritage sites like Cyrus’ ceremonial capital, Persepolis, Isfahan’s sumptuous Imam Square etc.

Joanna Millick the director of sales from MIR Corporation, has led several tours to Iran. She said: “I love the amazing archaeological sites, the beautiful and diverse terrain, great food, great shopping, quality roads and hotels – but the biggest draw is the friendly people. I feels it’s one of those places that you should visit before you form an opinion.”

Also, Paul Kristoff, the Editor in Chief from The City Lane online magazine explained his Iran travel experience in June 2015 and stated that: “There is a lot of information about Iran out there, however most of it is either false or out of date. We loved our time in Iran and want to show you the country through our eyes, dispelling many myths and misconceptions along the way.”

Before applying for your visa, you have to apply for an authorization code. You have to have one authorization number which determines if you are granted an application for a visa or not. If you like or have to travel within a guided tour, this code will normally be processed by Iran Traveling Center tour department; but if you wish to have just Iran tourist visa, you can use IranTravelingCenter visa department.

Undoubtedly, the most outstanding characteristic feature that sticks to your mind is Iran’s people. They’re warm, friendly and very good hosts. They’re generous and helpful, try to guide you to find your way, a good food or a suitable hotel. They invite you to tea or dinner and share their food with you. Depending on which cities you travel, they may borrow you their traditional dress to take some photos. Communicating with Iranians is easy, great number of them can speak English, especially in main cities.

Maybe one of the main differences to other countries you’d traveled before, is Iranian dress code and hijab, and this is the biggest concern for female travelers to Iran. As an Islamic country, Iran has its own rules for dressing in public.

Scarf: As a woman, you should cover the hair with headscarves, do remember to pack a headscarf in your handbag as you have to wear it the moment you exit the plane and are officially in Iran. This headscarf accompanies you all time you’re in the country except in hotel’s room. If your headscarf falls (which happens often!) don’t worry and quickly put it back on again. It’s not so serious point, but just pay attention at all times.

Tip 1: Wearing your hair in a high bun or ponytail helps keep the scarf in place!

Tip 3: You can buy very nice headscarves in local shops with very low prices; beautiful colors and patterns, call it a memento of Iran thereafter! (Mainly in Tehran and Shiraz)

Trousers: Trousers, jeans or long skirts depending on the traveling season are all OK.

Tip: It’s better to be more cautious in Mashhad, Qom and Isfahan and respect the values by wearing more fitting clothes.

For Men? Don’t worry! Dressing the same as you do in western countries. Just avoid short shorts. 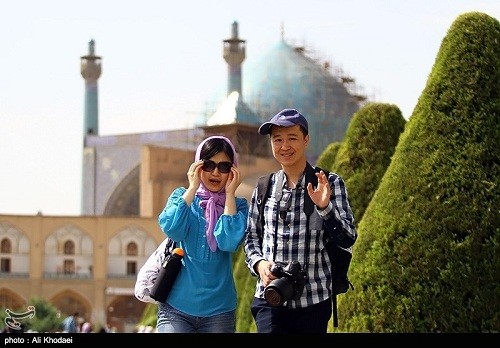 Financial Issues in Traveling to Iran:

Currency: The currency used in Iran is the Iranian Rial which is actually Toman. In fact they’re not two currencies, official rates are announced in Rial but in daily life Toman is used instead which has one zero less. For example 10.000 Rials is equal to 1.000 Toman. Do not lost; it takes a couple of days to get used to. Finally if it troubled you in paying just ask the seller whether the rate is in Rial or Toman.

Credit Cards: Credit cards are not working in Iran (except in some souvenir and carpet shops); so as a foreigner you’ll need to bring cash, and the best currency to bring with you is US Dollars or Euro.

How Much Cash Do You Need? Well, it’s not fixed but not including accommodation and domestic flights, you shouldn’t need to budget any more than USD $35-$40 per person, per day. That’s right, Iran is a cheap country to visit.

The internet in Iran is not in a good condition and high speed, connections aren’t stable and you can expect dropouts times during your browsing session. Although free wifi is offered in the hotels, it is almost difficult to find and use. Free wifi hotspots around the country are also very difficult to find.

If you are an internet-addict, its highly recommended to buy a prepaid SIM card, activating the unlimited or limited internet packages for the duration of your stay and enjoy using it almost everywhere, even on the roads. You can buy SIM cards in the airport or local shops, bests are Irancell and Hamrahe Aval. This is practical if you have a cell phone with an operating system. If not, the internet cafes outside of the hotels are cheap (2$ per hour) and convenient.

When it comes to Persian cuisine, try to select best tradition ones during your travel. Fresh green herbs are frequently used along with fruits such as plums, pomegranates, quince, prunes, apricots, and raisins. Persian main dishes are mainly combinations of rice and meat, such as lamb, chicken, or fish and vegetables such as onions, various herbs, and nuts. To achieve a balanced taste; flavors such as saffron, dried lime, cinnamon, and parsley are mixed delicately. Here get more familiar with Iranian most delicious edibles:

Persian Bread: The traditional Persian bread used to bake inside brick ovens by hand (still you can find few traditional bakeries around) others are made industrially. Most famous ones are Sangak and Barbari made of whole wheat leavened flat bread.

Chelo Kabab: Yes, you can call it as the national dish of Iran! It consist of steamed, saffroned Persian rice and kabab (grilled mixture of lamb meat, onion and spices). Main accompanies are grilled tomatoes on the side of the rice, butter on top of the rice and sumac (powdered sumac) to be sprinkled on the rice.

Do not forget to taste caviar, pickles, smoked fish in the north; samosas, falafel, hot shrimp in the south, Fesenjoon, Ghormeh Sabzi and rosewater-scented ice cream across the country.

Drinks: Alcoholic drinks are not available in Iran, just non-alcoholic beer in a variety of fruity flavors like peach, lemon and strawberry. Doogh is another Iranian drink you should try.