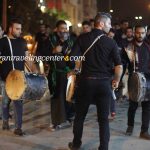 Muharram and Its Rituals in Iran

If you want to explore the other side of Iran and Iranian characteristics, Muharram is probably the best time to visit this country. So, set your camera as you will not find such unique traditions and rituals in the other parts of the world!

Muharram is the starting month in Arabic calendar and one of the four remarkable months named in Quran when war has been ordered forbidden in Islam. But, according to historians, it seems that the Umayyad Caliphate, Yazid (646-683 AD) was the first to ignore the law and broke out a war, known as the battle of Karbala against the family of Muhammad, the Prophet in 680 AD. The battle lasted for almost ten days during which Hussein Ibn Ali lost his followers and family and was killed on the tenth day, called “Ashura” in Arabic. Women, children and those who were survived the war were taken captive and sent to Damascus after the battle ended.

According to different narratives which are not based on evidence, Ashura has been an important point in time throughout the history. Some believe that it is the day Noah’s ship passed the storm or the day on which Ibrahim survived from the fire while others assume that it is the time when Joseph met his father after many years of suffering.

What seems real, however, is that Tasu’a and Ashura are the ninth and tenth days of Muharram, respectively, which have the greatest significance among the Muslims specially the Shiites. The Sunnites go fasting on these days as they believe in a religious tradition inherited by the prophet whereas the Shiites mourn for Imam Hussein and his followers who were killed on these days and they refrain from joy and happiness. Also, there is a notable book, called Ziyarat Ashura, they read during Muharram and on Ashura specifically; this retells what the martyrs went through in Karbala. Interestingly, the rituals are taken place differently in Iran and other countries where the Shiites inhabit. In Iran the Shiites start Majalis-e Aza (Mourning rituals) from the very first day of Muharram to Ashura which is practically the climax of Muharram. The last days close to Ashura, including Tasu’a are of utmost importance because Hussein and his family were killed on these days. They were deprived of water from the 7th day to the tenth when they were attacked and murdered by Yazid in the battle of Karbala.

Muharram is the most salient and respected month among Iranian Shiites, therefor you can see several rituals in all the cities in Iran. Accordingly, the very first thing that catches your eyes during Muharram are black and red fabrics and flags with which the streets are designed. Almost every single public place is covered with these fabrics on which some elegies are printed. Besides, there are some well-known elegies and laments sung on these days called “Azadari” in Persian. They connote the remembrance of Imam Hussein, his followers and family. Specifically, during the night, you can see different mourning congregation gathered together in a “Tekyeh” -a place where Shiites mourn Muharram- singing elegies and self-flagellating. The most well-known custom is to hit the chest in a rhythmic way based on the sound of drums or song. They express their grief that they were not with Hussein and his family to help them and repulse against what Yazid indicated.

Iranian Shiites perform other rituals, as well. A main performance during the first ten days of Muharram and on Ashura in specific, is a traditional memorial service which is quite common and named “Ta’azieh”. It is the representation of the battle of Karbala in which amateur actors and common people play a role without memorizing their script. In other words, they read aloud from their texts in an epic and sometimes lamenting form; the play can occur right in the middle of the uncrowded streets or where there are mourning congregations. Colors have a key role in this month which are symbolically being used in the design of clothes of Ta’zieh, too. Basically, red is the signs for Hussein’s enemies, black signifies mourners and green speaks of peace and friendship with Hussein and his family.

Besides, some people go to visit the tomb of Hussein and his family in Iraq in the form of a pilgrim tour. It is a respected action among the pilgrims especially on Ashura and “Arba’een”, the 40th day after Hussein’s death. Furthermore, one of the most traditional and common tradition among the Muslims is asking wishes from God and promising instead to feed people. Although this can be done on the normal days, the Shiites believe that Muharram is the best time to realize their promise; therefor, this tradition is well-established in this month and reaches its climax on Tasu’a and Ashura to feed the mourners.

Elderlies and those who firmly believe in Hussein and his uprising, put on black clothes during Muharram or march shoeless when they congregate to mourn or flagellate. Usually, there are few old men in the congregations called as “Pir-Qolam” who have specific characteristics; usually they have held Azaye-Hussein (mourning) for a long period of time and besides they are known as pious followers of Imam Hussein. Most of the congregations walk in the alleys and backstreets for self-flagellation which usually is accompanied by the beating drums and the people saying “Ya Hussein”. Also, you might wonder spotting mourners covered themselves with mud, however, this tradition is basically done in western Iran that is an indication of mourning for Hussein.

Moreover, you will find mosques crowded in these ten days where they welcome the congregation with juice, tea, coffee and meal. There, the mullah reminds people of Hussein’s sufferings, preaching sermons, talking about his uprising, his character and his status in Islam and inviting people to practice patience and resistance against oppression.

There is also an interesting competitive ceremony in which younger participants of the congregation try to pick up an extremely huge and heavy cross-like thing that is a symbol of the battle of Karbala in order to fulfill their dreams asking God. Furthermore, those Muslims who usually consume alcoholic drinks, avoid drinking during Muharram to respect Imam Hussein and his followers, however, smoking cigarettes and other drugs is excluded.

There used to be a prevalent custom practiced by the Shia on Ashura called “Tatbir” or “Qama Zani” in which the mourners of Hussein strike themselves with a kind of sword on their head causing blood to flow to remember the innocent blood of Hussein. Today it is officially banned in the public places and you rarely find this ceremony.

Muharram is not a month of festival for the Shiites but it is more a sad event while the Sunnites consider it the month of Moses victory dedicated to him from God. The Shiites have been encouraged to cry for Hussein and his family and to talk about them and to follow his path. Thus, they listen to sermons and Hussein’s tragic history, mourning. They do not marry or hold joyful ceremonies in this month because it is the time to respect their Imam’s death.

Despite the fact that Iranians share almost the same rituals all around the country in this month, every city has its own attraction. If you spend your vacation in Iran during Muharram, it is highly recommended to visit the cities like Yazd and Tabriz which are quite famous for their ceremonies and rituals on these ten days.

The old city in Yazd provides you with fascinating scenes and customs inherited from the ancestors. Beautifully arranged groups, all in black, who chant elegies in harmony with each other and follow a specific rhythm in their movements will amaze you that you cannot take your eyes of them. You will be welcome with small cups of tea or coffee or even a specific meal as you are believed to be invited by Imam Hussein. The best place to find these groups is Rozeh Mohammadieh Mosque which is a rather spacious place where you are allowed to take as many pictures as you would like. Next to diverse modes of rituals in Yazd, there is a renowned one called “Nakhl Gardani” in which a huge wooden structure is being picked up with the help of almost forty strong trained men. This structure, Nakhl, symbolizes Hussein’s coffin and his burial. This ritual basically takes place in front of Amir Chakhmaq Mosque.

Same case is true with Tabriz in which Azadari (mourning ritual) takes place quite uniquely. In being so, many people from children to old ones come together in determined groups and start saying “Shah Hussein” with having a wooden stick in their hands that symbolizes their readiness to participate in the battle of Karbala. Like other congregations in Iran, they walk in the back streets at night, beating drums and singing a sad lamentation in harmony with the group to inform the city of how great this tragedy is. In Tabriz, you will be amazed by the population you see in front of Karimkhan Mosque.

Although you might like to visit Iran on its happy and joyful days like Nowrouz, you will be fascinated by what you experience during Muharram in Iran; what you see and read about Iranian rituals on Ashura is almost nothing comparing to what you feel when you are in accompany with Iranian people on these days. Note that you can ask our guide to provide the ground for you if you probably would like to take part in these rituals and experience the atmosphere.

-Most in black like many  people around the world

– Green ( in Ta’Zieh theater for the companion of Imam Hussain )

-Ritual participants trying to not use jewelries or heavy mackeup

-laughing , happy music … are not suitable for this days if you are going to the Muharram mourning in Iran (that is why Muslims don’t have wedding ceremonies during Muharram month)

-Most of marching are in the morning and in the afternoon in Mosques ,Shrines or temporary places (tekiyeh) and mostly last till midnight