Located in an altitude of 1,600 m above sea level, Kashan is one of the main cities of Isfahan province. It is 240 km to the south of Tehran and 220 km to the north of Esfahan (Isfahan) and can be reached via a first-class highway, national road, or railway. The town’s population amounts to 400,000, living on an area of 2, 100 hectares.

In addition to its world-famous carpets, Kashan is also well known for its silk and the glazed earthenware tile called Kashi after its place of manufacture. Kashan is a beautiful large oasis town on the Qom-Kerman road running along the western edge of the Great Desert, Kavir. The city has long been noted for its silk textiles, ceramics, copper-ware, and rose water from the well-known rose fields of Qamsar, as well.

One of the most important archaeological sites in central Iran, it has a historical background of over 7,000 years. Kashan is also of interest for its connections with Shah Abbasi it was a favorite town of his, and he beautified it and asked to be buried here in the mausoleum of a 13th-century ancestor. Walking in the silent and peaceful alleys and back-alleys of the town, one can see very old buildings with brick walls constantly baked, as in old times, under the scorching sun.

The majority of historians and travelers to the town have called it a gate to the world civilization. Kashan flourished mainly during the Seljuk and Safavid periods of the post-Islamic history of Iran. Samples of artworks created by Kashani artisans can be seen in the famous museums of the world.

The town has many picturesque Badgirs (wind towers), essential in the town’s hot and airless summers before the introduction of air-conditioning. The modern industry plays a part in Kashan, in parallel with the ongoing social development. In the bazaar, however, carpet-weaving, embroidery work, the making of rose water, scent, pottery, and other crafts are carried on in much the same and with the same skill as of old.

The Agha Bozurg Mosque and School Complex in Fazel-e Naraghi Street, belong to the second half of the last century (Qajar period), when the country’s architects produced a number of unforgettable masterpieces.

Bazaar and Other Sites:

One of the most fascinating sightseeing places in Kashan is the bazaar historic complex (first constructed in the Safavid era, but rebuilt in its present form early in the nineteenth century) with many interesting sections incorporated in it, such as Saraye Amin od-Dowleh, caravansaries (Gomork, Now, Mirpanj, Borujerdiha, and Zoghaliha, nearly 1,100 years old), mosques (Mir Emad, Bala Bazaar, Tabriziha, and Kaffashha), baths (Khan and Gozar Now), water storages (Haj Seyed Hossein), and smaller bazaars.

Kashan has many close to 50 magnificent houses, that are part of the countries historical heritage currently. Be sure to visit as many as you can while in Kashan.
Known as the bride of Iranian houses is the Tabatabai house. Seyed Jafar Tabatabai a successful carpet merchant constructed this masterpiece in 1834.

The one a kind Borujerdis Old House was built nearly 130 years ago by a famous merchant named Haj Seyed Jafar Borujerdi from Natanz. This house is known as the symbol of Kashan architecture. 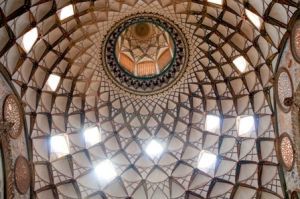 Several of these houses have been renovated to guest houses,  Be sure to check these marvelous houses when you are in Kashan.

Bagh-e Shah, the King’s Garden (also known as the Bagh-e Tarikhi-e Fin or Bagh-e Amir Kabir) at Fin 6 km to the southwest, and perhaps the finest surviving example in Iran, creates the contrast between the Kavir region and the greenery of the well-tended oasis below the adjoining Karkass mountain. A major part of Kashan’s water was supplied by the perennial source of Suleimanieh spring in the garden.

Between the Bagh-e Shah (Fin) and Kashan is the mound of Tappeh Sialk the site of a prehistoric culture which was dated by Ghirshman who excavated the Tappeh in the 30s and later, to the second half of the 15th millennium BC. Later discoveries showed that the Site is more than 7,000 years old. It is probably the richest archaeological site so far uncovered in central Iran, although the most interesting finds have been moved to various institutes and museums, including the National Museum of Iran in Tehran and Louvre in Paris.

One of the most interesting religious ceremonies of Shiites is held in Mashhad-e Ardehal, 40 km to the east of Kashan. Each year on the second Friday of the Iranian month of Mehr (early October). Since this was the day Sultan Ali was killed.