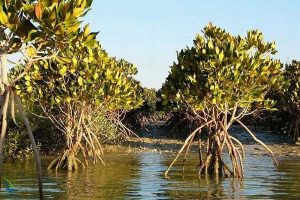 Qeshm Island Geo-park: Qeshm, with an area of 1491 square kilometers, is the largest Iranian Island in the Persian Gulf district, located on the Hormoz Strait. The island is only 22 kilometers from Bandar Abbas.The island consists of 59 towns and villages with the approximate population of 100,000 people. Reference to this island can be dated back to the Achaemenid Empire around 500 B. C. the island has also been referenced by the world famous traveler, Marco Polo in his writings. The island is endowed with various tourism and ecotourism attractions such as Qeshm Geological Features and Mangrove Marine Forest.

July 26 International Day for the Conservation of the Mangrove Ecosystem

The historical sites of this marvelous island are also numerous, such as ancient Portuguese castles, the historic mosque of Seyyed Mozaffar and Bibi Maryam and so on. Moreover, this island has many wonderful attractions such as a number of valleys, islands, natural parks and villages with their own and specific flora and fauna species worth visiting which are described below.

Qeshm Geo-park is an important ecological and cultural heritage of Iran. It is the only international Geo-park in the Middle East region. This geopark is unique in terms of its geological, geographic, archaeological and ecological features. For instance, the methods of fresh water keeping and collecting is really unique and manifested in the architecture of the island. Other unique features of the island are its local old culture, its lifestyle and wildlife, mangrove forest on the coastline and flora and fauna species of the island. Finally, there are about 20 geo-sites in the geo-park of the island which are as follows: Chahkuh Valley, Stars Valley, Korkorakuh, Namakdan Cave, Doulab, Shour Valley Geo-site, Statues Valley and Roof of Qeshm.

Stars Valley Geo-site is located close to Berkeh Khalaf Village, near the town of Qeshm and it is the most frequently visited part of the island by tourists. The local name of this attraction originates from the belief that there had been a meteorite fallen into this tract of Earth; thus having made the land brown and the air frozen-like and the formation of these geological structures. Some also believe that there are Jinns and Ghosts in here especially when the sun sets and everywhere becomes dark; the real reason could be the bizarre geological forms and the blowing wind into the Valley at night time. However, the geological morphology of this region has been the result of erosion by rainstorms, wind and gravity. But in the walls of the valley, two different types of layers are observable: A thick and soft layer of light color (beige or light gray) under a thinner layer of harder nature (white or dark gray color). the remnant of hard structures sometimes are hat-like cap rock which almost protect the pillar columns from further erosion.

Chahkooh Valley Geo-site is another exceptional example of erosion through rainstorm water. Heavy rainstorms quickly flush water through geological structures. The second factor in forming this beautiful valley has been erosion. Moreover, the presence of concave and round structures or linear and oval structures on the walls of the valley is the result of erosion by water. Considering the low level of rainfall on the island, and the shortage of freshwater, the native inhabitants of the island took the advantage of the structures of this island by digging wells inside the main axis of the valley to act as water reservoirs as they were impermeable to water.

The Salt Cave is the following attraction and it is located on the south western part of the island, and hosts the longest salt cave of the world which is 6 kilometers long. These are formed when a huge amount of salt moves towards the surface of Earth due to its light structure compared to its surrounding structures. They have really interesting aspects such as salt falls, salt springs and salt caves. Moreover, some beautiful ponds have been formed by sedimentation of salt. Additionally, in some places, where water has penetrated into the ground, some beautiful ponds with salt crystals have been formed. Some of the most amazing structures that may be found inside the Salt Cave is Stalactites and Stalagmites. Another interesting feature of this island is the existence of different colors on its structures, each showing a different element in nature by its distinctive color. For instance, the color of red shows iron, yellow, sulfur and so on. An important note is worth paying attention and that is the fact that each piece of crystal if damaged needs at least thousands of years to form and the visitors should pay to the protection of the area and its natural treasures.

Another amazing beauty of Qeshm Geo-park is its various kinds of fauna and different species of animals such as birds, mammals, reptiles, insects and snakes native to this part of Earth. Some of these birds are rare and even strange ones. The world smallest mammal called Shrewd and largest mammal which is Humpback whale live on this island. Even the world’s largest bird live here. You can also see some migratory birds such as Pelicans or Flamingos which migrate here in cold seasons in large groups. In 2003, the Environmental Management Office submitted a proposal to establish a bird sanctuary on the north-east coast of the island to include the broad expanse of inter-tidal mudflats between Qeshm and the village of Dargahan. The sanctuary extends 11 kilometers and regularly holds large numbers of pelicans, flamingos, spoonbills, herons, egrets, shorebirds, gulls and terns. An upcoming project of constructing a research center with accommodation is among the future plans of this area.

Qeshm Island, South of Iran, that is Persian Gulf and its islands like Qeshm, have become quite popular among the travelers since the past few years. From the natural attractions to amusing hobbies and entertainment can be found in these islands. Many tourists prefer experiencing southern ecolodges during their travel to south Iran, specifically Qeshm, instead of staying at luxurious hotels. These home stays enable you to feel and touch Iranian village lifestyle while provide you with their best amenities.

There are more than 50 homestays in Qeshm island .

Guran is a village in Qeshm County, Hormozgan Province and it belongs to Sassanid era. It is said that in Guran you can visit mythological figures in Chahkooh Canyon or the Valley of Statues, for instance. This village would see the last generation of southern Iranian experts in building Lenj boats (made of wood) which is well-known in Iran as one of the tenth national arts.

Located in Gouran Village, this fantastic ecolodge is 100 years old and is 80kms to Qeshm Island. It contains 8 rooms (6 rooms and 2 four-person cottages). The ecolodge has no private fridge and bathroom, meaning that they are shared among all the guests. Also, to give you a sense of nature lifestyle, there is no bed and no T.V and the tourists should sleep on the mattress-like beds.

Breakfast is being served every morning from 7:30 to 8:30; feel free if you would like your meals in your room. Note that the teahouse is open 24 hours.

Located in Dehkhoda village, this hostel includes 9 rooms (two-person to six-person capacity) while it can cater 30 to 36 tourists at the same time. Koloudang homestay seems suitable for elderlies and even crippled travelers due to its smooth yard and surface while tourists can enjoy its traditional architecture. This semi-ecolodge hostel serves tasty native foods of southern Iran, too.

It is close to the airport and mangrove forest.

Fardis homestay is 55kms to Qeshm in the southern coast and is close to the airport. There is a beautiful shelter roofed with palm leaves. Fardis ecolodge contains 6 thatched-roof rooms decorated with native handicrafts. The rooms are similar to ancient southern water reservoirs and they also provide you with Wi-Fi. Like Medali ecolodge, Fardis homestay has no bed, too. Because it is a coastal homestay, it is suitable to play beach volleyball. Besides, you can swim in the Persian Gulf or take photos since the water is lucid in here.

Haft Rango village is home to a well-equipped but natural ecolodge called Sharifi homestay and also is known as Haft Rango. Being large enough, Haft Rango includes 23 rooms capable of catering 120 tourists at the same time. Only some of the rooms have private services. There are also 3 courtyards called “Derakhtan” (trees), “Mahi” (fish) and “Parandegan” (birds). Depending on the yard each has its own specific facilities. You can visit the handicrafts gallery, have a cup of southern tea in their café, unwind under the shelter roofed with palm leaves at the center of the yard or take a short nap in the hammock. Haft Rango homestay is close to mangrove forest and Tandis-ha Valley.

This homestay is located in Soheili village which has beautiful palm trees; this ecolodge is dead popular for native and sea foods. This homestay serves 150 tourists at the same time. Because it is located at the center of Qeshm, it is appropriate for touristic tours.

This ecolodge is among the most different homestays in the south and on Qeshm Island. This homestay is painted and decorated with traditional and colorful handicrafts. It contains 34 rooms, too. Ms Zinat and the other villagers take the travelers to show them Salakh village and their traditional customs and conventions.

Tabl Village is the closest one to mangrove forest in comparison to other villages. Located in Tabl Village, Pir Hara homestay provides the travelers with small and large rooms some of which include private bathroom and some using shared ones. Compared to other ecolodges of Qeshm, it seems cleaner and more luxurious. Like others, it excludes beds and the guest rest on mattress-like beds. The homestay is close to the mount on top of which you will have a large-scale view over a great part of Qeshm.

Nakhoda Amini ecolodge is also located in Tabl Village, next to the mosque. It is a chic place and includes equipped facilities. The homestay has one large yard and two smaller ones which totally provide 20 rooms which have the capacity for 120 tourists. You need to use shared bathrooms in order to touch the traditional atmosphere of the village. Tabl has its own natural attractions while you can also spend an hour at most to get to Qeshm and enjoy the island’s attractions.

Facilities: parking, Wi-Fi-, shared bathrooms and kitchen, tour guides and many others

This ecolodge is located in Soheil Village where Saheli village with the beautiful environment. Its architecture is very similar to local houses in southern Iran and decorated in traditional ways. Totally, it contains 14 rooms catering 80 travelers. Despite others, Boom Amini provides the tourists with private bathrooms and there are also shared ones for those who do not mind private ones. This homestay is the best for taking part in traditional Persian festivals and musical ceremonies. Make sure to try its seafood and local menus. It has also short distances to the attractions in Qeshm.