Isfahan is one of the major cities of Iran in terms of tourism attractions and historical monuments. This city is called half of the world by its people as they believe it has the beauties of one half of a whole world in itself. It is a city with architectural wonders in which the azure blue color is predominantly used. This city is a lively city, because the famous river of Zayandehroud flows through the city. The river watering gardens and fields with its numerous tributaries along its 360 km course, moves from west to east through the city, and divides off Julfa and some other suburbs from the main part of the city, but most of the main attractions are to the north of the river. The city of Isfahan has many monuments that have been recorded as world heritage by UNESCO such as its world famous Naghsh-e Jahan Square and so on.

Isfahan steelworks started production in 1971 and is planned to double its present output of 1.900.000 tons in the coming years and make Iran self-sufficient as regards steel production. The Zayandeh-rud River watering gardens and fields with its numerous tributaries along its 360 km. the course flows from west to east through the city and divides off Jolfa and some other suburbs from the main part of the city, but most of the main attractions are to the north of the river. The first skyscraper of Iran with a marvelous view over the public Maidan and city to the front and the Shah’s pleasure gardens at the back, it is seven floors tall, accessible by a difficult staircase, square in plan, probably a northern type, with the Talar as the second story. All the little rooms have points of interest. A huge reception hall capable of holding two hundred or more courtiers, its interior was covered with delicate polychrome relief. On the sixth floor, niches shaped like bowls or high stemmed flasks are dug into the wall. Their purpose is not only decorative but also acoustical, since here was a music room. Many of the beautiful murals and mosaics which once decorated the many small rooms, corridors and stairways have been destroyed, partly in the Qajar period and as a result of natural causes in recent years Naqsh-e Jahan Square, known as Imam Square, formerly known as Shah Square a square situated at the center of Isfahan city, Iran. Constructed between 1598 and 1629, it is now an important historical site, and one of UNESCO’s World Heritage Sites. It is 160 meters wide by 560 meters long (an area of 89,600 m2). The square is surrounded by buildings from the Safavid era. The Shah Mosque is situated on the south side of this square. On the west side is the Ali Qapu Palace. Sheikh Lotf Allah Mosque is situated on the eastern side of this square and at the northern side, Keisaria gate opens into the Isfahan Grand Bazaar. Today, Namaaz-e Jom’eh (the Muslim Friday prayer) is held in the Shah Mosque.

Built as a reception hall by Shah Abbas 1 (1657 A.D.) behind the Ali Qapu Palace continues the old Talar or columnar porch. At its simplest, it is only a roof-high porch constituting the facade. When attached to a royal building, it provides a huge outdoor reception hall and is susceptible to lavish embellishments, which have included mirror-plated columns, panels and stalactites, and polychrome mosaic ceilings.
The name means “The Forty Columns”, although there are actually 20. A reflecting pool is provided to see the other 20. A more mundane explanation is that 40 were once used synonymously with many in Persian, and still is in some quarters. Walls of Chehel Sotoun were covered with frescoes and paintings depicting specific historical scenes. Khaju Bridge is a bridge in the province of Isfahan, Iran, which has been described as the finest in the province. It was built by the Persian Safavid king, Shah Abbas II around 1650, on the foundations of an older bridge. Serving as both a bridge and a dam (or a weir), it links the Khaju quarter on the north bank with the Zoroastrian quarter across the Zayandeh River. Although architecturally functioning as a bridge and a weir, it also served a primary function as a building and a place for public meetings.[1] This structure was originally decorated with artistic tilework and paintings and served as a teahouse. In the center of the structure, a pavilion exists inside which Shah Abbas would have once sat, admiring the view. Today, remnants of a stone seat are all that is left of the king’s chair. This bridge is one of the finest examples of Persian architecture at the height of Safavid cultural influence in Iran. In words of Upham Pope and Jean Chardin, Khaju Bridge is “the culminating monument of Persian bridge architecture and one of the most interesting bridges extant…where the whole has rhythm and dignity and combines in the happiest consistency, utility, beauty, and recreation.”

Imam Mosque also called Masjid Shah (Royal Mosque) before the victory of the Islamic Revolution, begun in 1612, and, despite Shah Abbas’ impatience, under construction until 1638, represents the culmination of a thousand years of mosque building in Iran. The half domed arch of the outer portal on the square understood as an aspect of the square rather than of the mosque is the most thrilling example of human artifice that could be imagined. Its height amounts to 30 in., the flanking minarets are 40 m. tall with the sanctuary minarets higher still and the sanctuary double-shell dome soaring not less than 54 in. This is a world-famous architectural monument of the Safavid period in New Jolfa. The belfry faces the main entrance. There is a small museum (originally built in 1930, and moved to the present-day premises in 1971) where you might be able to find a guidebook on New Jolfa in English or someone who speaks English, as most educated Armenians do. There are as many as 13 other churches in New Jolfa as well. The next two famous ones are the Holy Mother of God and the Bethlehem. Vank Cathedral’s Press was founded in 1636 and was one of the first ones in the Middle East to print the Book of Psalms in 163 8. During its 3 5 0 years of operation, the Cathedral’s Press has printed about 500 books and thousands of pamphlets, etc.

This small mosque on the eastern side of the square is datable to the first years of the seventeenth century and was built by Shah Abbas in honor of the great Lebanese Sheikh, who was a sort of Islamic Billy Graham of his time. The enormous dome is supported by walls 170 cm. thick, and its solidity is transmuted into lightness one would even say fragility by two features of the utmost tact and daring: a huge aperture and several high windows to trap the maximum amount of natural light, and steadily-decreasing concentric ellipses of midnight blue with delicate white arabesques vanishing to all or nothing in the center of the dome. The mihrab is decorated with mosaic tiles and stalactites, all of the highest artistic value, and the name of the architect, Mohammad Reza, is given in two tablets installed inside it. This is pure architecture, flawless and serene, and still as perfect as on the day of dedication more than three hundred years ago. No one in a receptive or contemplative mood can enter without a shock of the sense of being received into a Presence, for all its elegance, and finish it has no weakness the scale is too ample, the patterns too strong.

Things to do in Isfahan Isfahan is the Handicrafts shopping center of Iran

they do care more about money and saving

Zayandeh-Rod river is the main natural attraction of Isfahan

It has the biggest bird garden of Iran

Try Beryani (made by meat) as the most famous traditional food 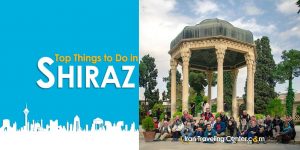 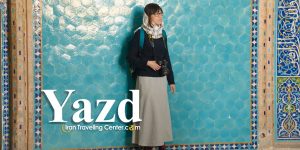 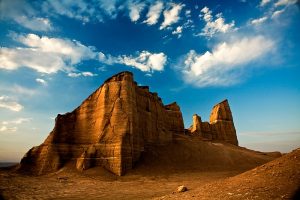 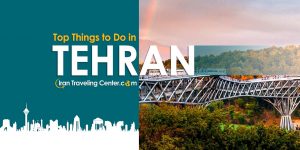 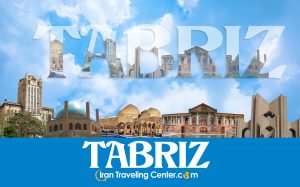 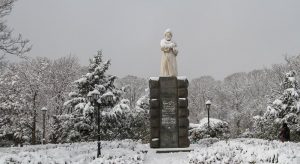